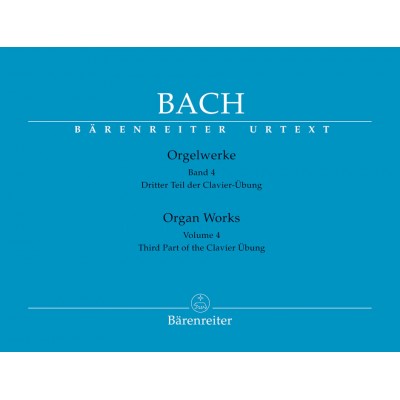 In 1739 Bach’s Third Part of the Clavier Übung was published on 80 pages closely printed. Ever since then the collection has been regarded as a high point in the history of organ composition as it offers an impressive cross section of Bach’s artistry.

This present volume is an updated edition of Volume 4, Series IV, of the New Bach Edition, presented by Manfred Tessmer in 1969. A fully revised edition proved unnecessary, as there were relatively few corrections affecting the musical text. However, the volume now includes a detailed Preface by Christoph Wolff which discusses not only the work’s genesis but also offers an up-to-date description of the sources. For the new engraving of the musical text page-turns were reviewed and improved.

Bach’s autograph is considered lost and so the main source is the original print of the collection from 1739. In collaboration with the Leipzig Bach Archive and its database Bach digital this new edition includes links to two important copies of the original print which contain hand-written entries by Bach himself.


Any complete scholarly-critical edition of the works of Johann Sebastian Bach must, in the interest of its use by researchers and performers, incorporate intervening new discoveries wherever possible. With this in mind, Bärenreiter has entered an agreement with the Leipzig Bach Archive to reissue particular volumes as applicable, either in updated performing editions based on the New Bach Edition or in thoroughly revised editions based on the New Bach Edition - revised. In this way, each new performing edition will represent the cutting edge of research.

Further hallmarks of this new generation of Urtext editions will be detailed, up-to-date Prefaces and newly engraved musical texts with optimum page turns. Each volume will list incipits with links to the relevant manuscripts in Bach digital thereby enabling the user to gain quick access to the sources.


-With altered readings integrated into the musical text taking into account new musicological evidence
-With a new Preface (Ger/Eng) discussing this work and its sources by Christoph Wolff
-With links to the relevant sources in Bach digital via http://links.baerenreiter.com
-Newly engraved and with improved page turns
-Format: 24cm x 30.5cm