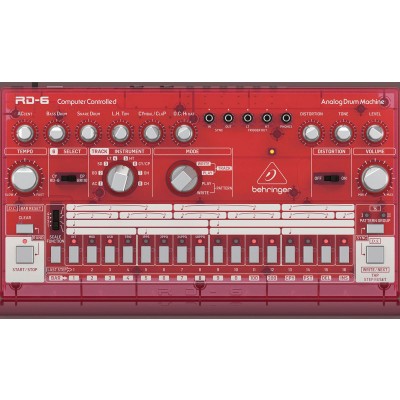 The RHYTHM DESIGNER RD-6-SB provides all the tools you need to become a master beat-maker, including: 8 drum sounds and a 16-step sequencer - for a fast, easy-to-use drum machine that will rock your house! Whether you're new to drum programming or a seasoned pro looking to upgrade their setup, the RD-6-SB has everything you need to step up to the big leagues.

A rejuvenated masterpiece
The RD-6-SB has been carefully designed to offer new possibilities for creating rhythms by reviving the timeless design of one of the boxes. the most classic rhythms of yesteryear. Taking a fresh and modern approach to a classic drum machine, the RD-6-SB lets you harness the phenomenal sound of the venerable TR-606 while enjoying new features. You can manipulate punchy bass drums, sparkling hats, and even the authentic and renowned clicking sound of the BR-110 to take your rhythmic performance to the next level. He's a monster of creating analog rhythms!

Full Control
Designed to enhance the way you play, the RD-6-SB features a 16-step drum sequencer that lets you switch between 32 distinct patterns in real time. Start creating chunk structures on the fly and modify them as you like. Mix any of the 8 drum sounds by adjusting their dedicated level knobs. The RD-6-SB also comes with distortion based on the venerable DS-1. Add spice and a bit of edge to your sound by activating the distortion switch and adjusting the amount and tone of the distortion. Each pattern you create can also be chained into an entire song up to 256 bars, which is eight and a half minutes of beats, perfect for those spicy jams where you just can't stop.

USB Control
To bring the RD-6-SB into the modern era, USB connectivity has been added for MIDI synchronization and triggering. The RD-6-SB can thus be controlled by your DAW, allowing songs and patterns to be exchanged or individual sounds to be triggered.

Numbers
The RD-6-SB has 11 knobs and 26 keys, all arranged in a very intuitive format that brings fun to the creation of rhythms. Input and output connections include: Open or Closed Hi-Hat, Clap, Cymbal, Low and Hi Tom, Snare and Bass Drum Voice Outs; Start / Stop for connecting a pedal; MIDI In, Out and Thru over USB for connecting the RD-6-SB to a DAW and 5-pin MIDI ports.

Highlights
- An amazing drum machine with authentic analog circuitry for classic sound performance.
- Authentic reproduction of the original circuitry with matched transistors
- 8 original drum sounds with mix parameters and the possibility of overall boost
- Authentic and much loved click sound of the DR-110 drum machine
- 6 independent analog outputs for the external processing or recording your rhythms as multi-audio tracks
- Easy-to-use 16-step drum sequencer, with real-time switching between 32 distinct patterns.
- Patterns can be chained together to form complete pieces of up to 250 measures.
- RAT-inspired distortion circuit * to add spice to your sounds.
- 16 authentic style step buttons with LED indicators for easy pattern creation.
- 11 controls and 26 switches to give you direct and real-time access to all important parameters
- MIDI and USB implementation for synchronization and connection to external devices.
- Synchronization options include USB, MIDI, Clock and Internal for maximum versatility