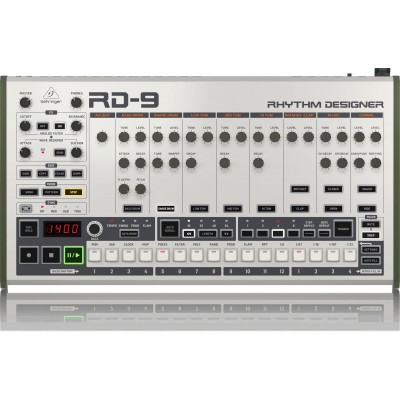 The RHYTHM DESIGNER RD-9 provides all the tools you need to become a master of the beat-maker, including: 11 drum voices; a 64-step sequencer; a wave designer and a dual-mode filter - for a full-fledged drum machine that will rock the house! Whether you're new to drum programming or a seasoned pro looking to upgrade your setup, the RD-9 has everything you need to step up to the big leagues.

The rejuvenated masterpiece
The RD-9 has been carefully designed to open up new possibilities for rhythm creation by reviving the timeless design of one of the most famous drum machines. most classic of yesteryear. Taking a fresh and modern approach to a classic drum machine, the RD-9 lets you harness the phenomenal sound of the venerable TR-909 while enjoying new features. From colossal basses to sizzling hats, you can manipulate them to take your rhythmic performance to the next level. He's a monster of creating analog rhythms!

Complete control
Designed to enhance your performance, the RD-9 offers all-new features for live use in each of the sequencer modes, including step repeat, note repeat, triggering in real time and live step-overdubbing. This makes it easy to activate pattern mode recording, allowing you to build song structures on the fly and return to playback mode at the touch of a button. Each of the 11 original drum sounds has its own unique tuning, level, attack and decay controls, allowing you to tune each sound the way you want or tweak it in the heat of the moment. to create drum sounds that vary in intensity and pitch as the song progresses. Add a little more excitement with the autofill feature and introduce more variation. You can even select another song in memory without interrupting playback, letting you play entire sets from start to finish, just with your RD-9.

Powerful and Feature-Rich Sequencer
The RD-9 features one of the most powerful step sequencers ever. The 64-step sequencer can store up to 64 patterns and 16 songs with a continuously variable swing, allowing you to emulate a real drummer and give the rhythms you create a more human feel.

Wave Designer and Dual Mode Filter
The built-in Wave Designer has individual attack and sustain controls that can be applied to individual voices to take your drum rhythms to another level. Additionally, the RD-9's highly flexible dual-mode filter knob allows you to switch between LPF and HPF, allowing you to experiment with the cutoff frequency and resonance controls to create out-of-the-ordinary beats, while that these smooth sweeps can be recorded directly into the sequencer and refined using the step editor.

Parameter Chaining
The RD-9's robust encoder allows you to set separate chaining preferences for each of your parameters, allowing them to operate globally or toggle when a song or pattern changes. Parameters include tempo, swing, flame, probability, independent track mutes / solos, FX bus assignments, filter modes, and sweeps for enhanced real-time control. Patterns can be edited on the fly for additional creative control when using the RD-9 as the heart of your live setup.

USB Control
To bring the RD-9 into the modern era, USB connectivity has been added for MIDI synchronization and triggering. This allows the RD-9 to be controlled by your DAW if desired, thus allowing individual sounds to be triggered.

The Numbers
The RD-9 has 33 buttons and 58 keys, all arranged in a very intuitive format that brings fun to the creation of rhythms. Input and output connections include: Phones; mono audio; MIDI In, Out and Thru via USB and 5-pin MIDI ports; and 11 independent analog outputs for external processing or recording your rhythms as multitrack audio. With its 3 trigger outputs, the RD-8 lets you control external synths and hardware sequencers to create songs without having a digital audio workstation (DAW) in sight. The RD-9 can also send and receive clock information with very precise timing to synchronize with the outside world.

Highlights
- An amazing drum machine with authentic analog / digital sound engine to create classic sound performances.
- 11 original drum sounds with additional parameters and the possibility of global
boosting - Powerful 64-step drum sequencer supporting poly-meter, step repeat, note repeat, real-time triggering, staging mute tracks and solo tracks.
- 10 independent analog outputs for external processing or recording your rhythms as multitrack audio.
- The integrated FX bus includes a wave generator and a dual mode analog filter with voice assignment.
- Live recording, editing and playback of analog filter cutoff via automation.
- Storage of 16 songs and 256 patterns, all of which can be imported / exported during playback for an unlimited number of songs and patterns.
- Pattern mode allows you to organize patterns into complete songs and set the number of repetitions per song part.
- Song mode allows you to chain songs together for concerts and extended compositions.
- Unique auto scroll function allows improvisation in all modes.
- Full MIDI in / out / traversal and USB implementation for synchronization and connection to external devices.
- Sync options include USB, MIDI, Clock and Internal for maximum versatility.
- Encoder for editing parameters such as Tempo, Swing, Probability, Flam and Random.
- High visibility LED display for easy editing of program parameters
- Powerful headphone and main outputs on 1/4 "connectors