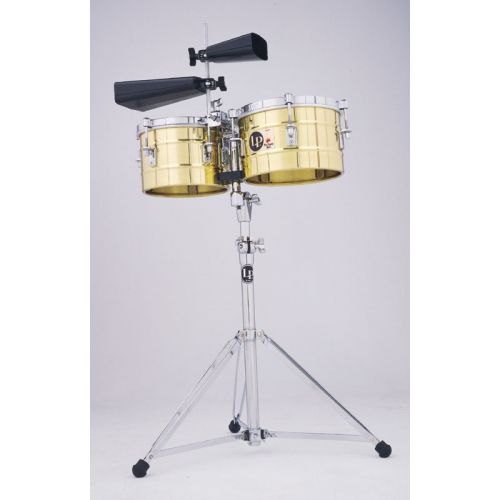 Elvis may have been known as “The King of Rock and Roll,” but to fans of Latin music icon, the late Tito Puente will always be remembered as “El Rey del Timbal” (The King of the Timbale). Puente was responsible for bringing timbales from the rear to the forefront of the band in Latin dance music and Latin jazz. He was the winner of four Grammy Awards, has a star on Hollywood’s Walk of Fame and received the National Endowment of the Arts Award from President Clinton. Puente’s craving for innovation and perfection helped lead to the design of LP’s Tito Puente Model Timbales. Tito was honored when a set of his namesake Timbales was placed into the Smithsonian Institute’s permanent collection.

All LP Tito Puente Timbales, Thunder Timbs, and Timbalitos are sold complete with a chrome plated, heavy duty, steel Timbale Stand. The stand has a die cast, geared tilter that locks in tight for either straight or tilted playing. It is height adjustable, and also has an anti-rattle sleeve. It comes complete with an adjustable cowbell holder made from welded steel and features LP’s superior eye-bolt assembly. LP Timbale Shells are available in genuine stainless steel, solid brass, or bronze; each possessing its own distinct sound. The genuine stainless steel shells produce very bright and crisp, loud sounds; the solid brass shells produce warmer sounds; the bronze produces a superior and distinctive cutting cascara sound.

* Tito Puente began incorporating LP Timbalitos into his set up in 1979 after an LP sponsored world tour.
* They have a distinct sound and provide a great contrast to other timbales.
* The shells are 9 1/4" and 10 1/4" in diameter, with a depth of 6 1/2" in solid brass.
* A heavy duty, fully height adjustable tilting timbale stand.
* A cowbell bracket, a pair of timbale sticks and a tuning wrench is included.
Marken Referenznummer:LP818502
Kundenbewertungen
/5
on reviews
Quality
Quality / price
Use
See all reviews
VIDEOS




Vergleichbare Artikel
Hier schlagen wir Ihnen vergleichbare Artikel aus derselben Preisklasse vor.

-9%