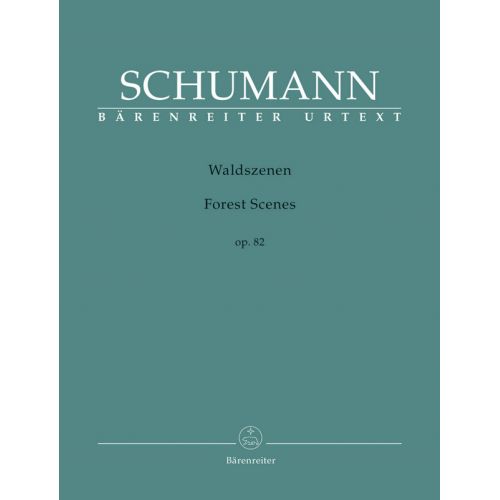 Schumann’s "Forest Scenes" op. 82 date from the years 1848/49. This was the composer’s most creative period but one which was marked by revolutionary unrest and political uncertainty. As well as choral compositions and major dramatic works including the opera "Genoveva" and "Manfred" Schumann created the intimate piano cycle Forest Scenes, inspired by illustrations of the same theme. The last to be written was the wistful-filigree "Vogel als Prophet" (no. 7), probably the best-known piece in the cycle. The pieces of moderate technical difficulty are enchanting in their song-like poetry, and are a jewel of domestic music-making from the Romantic period.

“Vogel als Prophet” and “Herberge” have been printed using a fold-out page so that no page-turns are necessary.

The leading German pianist Ragna Schirmer
has earned an outstanding reputation, not only by winning the Leipzig Bach Competition twice but also for receiving numerous awards including two ECHO-Klassik prizes. She has long had a special interest in historical performance practice on modern instruments, reflected most recently in her highly-praised complete recording of the keyboard suites by George Frideric Handel. As well as an international performing career, Ragna Schirmer is currently a professor at the Mannheim University of Music and the specialist school Latina August Hermann Francke in Halle.
Robert and Clara Schumann’s compositions feature at the centre of Ragna Schirmer’s work and she has recorded Robert Schumann’s "Variations on a theme by Beethoven" and "Symphonic Studies" on CD. Her concerts which she plays on Clara Schumann’s original Grotrian grand piano of 1879 have given her important insights into practical performing issues. She has now incorporated these into her studies of Clara’s fingering of Schumann’s "Scenes from Childhood" op. 15 and "Forest Scenes" op. 82.
Marken Referenznummer:BA9640
Kundenbewertungen
/5
on reviews
Quality
Quality / price
Use
See all reviews
VIDEOS




Vergleichbare Artikel
Hier schlagen wir Ihnen vergleichbare Artikel aus derselben Preisklasse vor.
