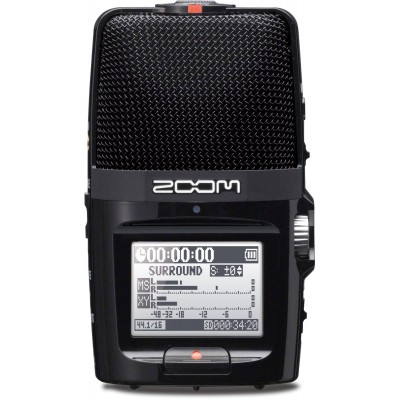 The product range of zoom

add remove
The H2n is the only portable recorder to offer five built-in microphones and four different recording modes: X / Y, Mid-Side, 2 channels and 4 channels. Its other advanced functions include automatic gain control, built-in MS decoding and various effects such as compression, limitation and low-cut filtering. You can even use the H2n as a versatile USB microphone !

Thanks to its multiple microphones and recording modes, the H2n is suitable for almost all types of application:
- Recording of concerts and rehearsals with stereo sound
- On-site videography - H2n offers you a multitude of postproduction options
- Creation of soundtracks for YouTube videos
- Creation of audio archives for important events
- Use as USB microphone with recording software

The H2n is equipped with not one, not two, but five built-in microphones . Two of them are arranged in X / Y pair, while the other three are arranged in an MS configuration ("Mid-Side"). The H2n allows you to combine signals from both X / Y and MS microphones to create stereo recordings of everything you hear: both the sounds heard in front of you and those from all directions.

The H2n has an arsenal of effects allowing you to perfect your recordings and solve problems or compensate for acoustic peculiarities specific to the recording location.
- You can use compression and limitation to control level fluctuations, then acting as an automatic volume control. The main difference between the two is that a limiter attenuates loud sounds more significantly.
- A low cut filter removes components of the signal below a given frequency. This is useful for eliminating unwanted noise, wind noise, breath and other types of low frequency rumble such as the resonance transmitted by a microphone stand on stage.
- You also have an built-in metronome and a chromatic / guitar / bass tuner. In addition, it is possible to perform loop playback and vary the playback speed without changing the pitch (or vice versa) to more easily repeat a pass.

Monday to Friday from 9am to 7pm
Saturday from 10am to 6pm.
Quick navigation
Home
Recorders
Portable recorders
