The history of pioneer dj

The brand pioneer Pro DJ were founded in June 1994 in the context of the appearance of the famous and revolutional CD player for DJs, the CDJ-500. The japanese enterprise completed quickly his product range with the CDJ-600, the first mixing desk for DJs with time-related effects. Other products like the EFX-500 and the DJM-600 left their mark on the development of the DJ scene until today. The japanese brand developped their innovative and intuitive products in cooperation with DJs. So it is only natural that the player CDJ-1000 - which became cult - was presented in 2011.

Pioneer Pro DJ is also known for producing products which change the world! You can see this already in their name: Pioneer. They presented a lot of products which became reference products like for example the mixing desk DJM-909. In 2005, Pioneer left still their mark on the wit of the DJs which wanted to distinguish themself from the discos and clubs by videos and created the DVJ-X1, the first CD-DVD-player for DJs.

They expanded quickly their offer of products to mix simultaneously audio and video by the new player DVJ-1000 and the incredible audio-video-mixing desk SVM-1000.

The year 2009 is marked with an 90 degree rotation. They changed their name and became pioneer DJ. In this year exactly, they presented the software Recordbox. The 21 of September 2009, there were another revolution in process: Pioneer DJ predicted the "beginning of a new era" and revealed the multimedia players CDJ-2000 and CDJ-900 together with the mix-prepairing software Recordbox. Day by day, the interest for this software grew and the international DJ-society developed that the "Recordbox-philosophie" is the union of the best from hardware and software.

This concentrate of technology makes it possible for the DJs of every level to perform real musical miracles, in the clubs of today and tomorrow. It remains to be seen which is the next innovation of this brand. 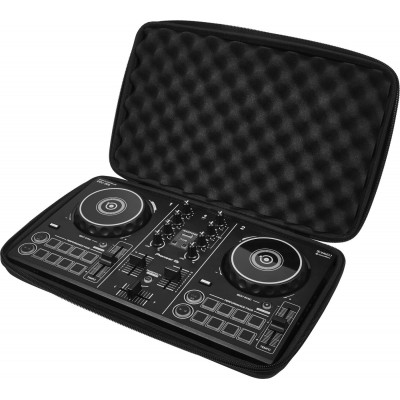 pioneer dj
BUNDLE XDJ-RX2 + DJC-RX2 BAG
digital mix dj controllers
£1635.75
Online
Ref.: 306726
Woodbrass uses cookies to ensure that we give you the most appropriate services and offers according to your personal interests. If you choose to continue using this website, you agree to our use of cookies.

I agree
