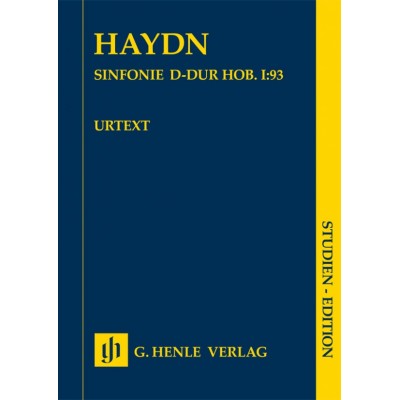 The product range of henle verlag

he twelve “London Symphonies” constitute the sublime final chord in Haydn's symphonic work. They were composed for London impresario Johann Peter Salomon, and Haydn himself directed their creations while he remained for some time in the English metropolis in the years 1791-92 and 1794-95. Symphony No. 93 in D major, probably composed in the winter of 1791-92, was found, with its musical turnings easy to follow (but not simplistic, however), to correspond well to the London taste which demanded melodic clarity and expressive pathos. It was also the baroque tones reminiscent of Handel in the slow introduction of the initial movement and the Finale with festive tones of timpani and trumpets which, already, then enjoyed the best reception - and it is therefore not by a miracle that this Symphony should , after its execution in 1792, to be replayed several times in the same season! The study edition reproduces the text of the complete edition of Haydn's works, thus guaranteeing the highest scientific quality. An informative preface and a brief critical commentary make this handy score an ideal accompanist for all Haydn fans, as well as all those who wish to become one.
Brand reference number:HN9061
Quick navigation
Home
Sheet music
Classical sheets
Ensemble and orchestra
Full score
Pocket score
Similar items
find below suggestions for equivalent products in the same price range.

-6%