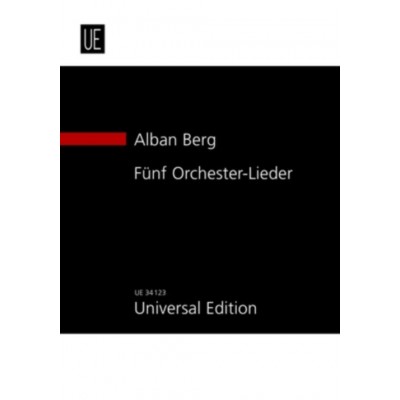 The product range of universal edition


Description
(…) Close study of the score has revealed the remarkable sophistication and originality of the architecture of the "Altenberglieder". The careful organization of motives relating Songs I and V is perhaps the most impressive aspect of this architecture; the relationship of the twelve-note passacaglia theme in Song V and the viola melody beginning at m. 12 of Song I is an adumbration of Schoenberg's serial technique of a decade later, while the harmonic relationship of two five-note chords at mm. 14-15 of Song I, which appear in reverse order at mm. 50-55 of Song V, defines an overall arch-form for the entire cycle. It is structural aspects like these that mark Berg's "Altenberglieder" as a work of particular importance in the historic development that culminated in Schoenberg's twelve-tone technique; that discovery, which has had such profound influence on composers ever since, can now be seen as the result of a search for structural coherence and comprehensiveness in which all three of the great Viennese, Schoenberg, Berg, and Webern, shared. (Mark DeVoto)