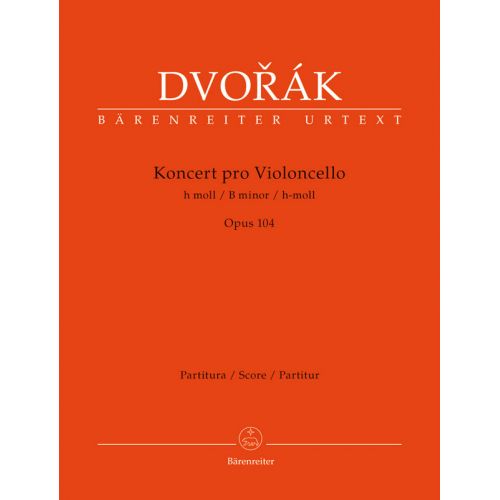 Like every other great 19th-century solo concerto, Dvorák’s famous Cello Concerto was a collaboration between composer and virtuoso. It has long been known that certain solo passages in Dvorák’s autograph score were actually written by the cellist Hanuš Wihan; but Bärenreiter’s edition now reveals that some details in the orchestral parts are also in his writing, showing just how closely the two musicians were working together.

The editor Jonathan Del Mar has painstakingly examined all the surviving sources, including two that have hitherto been either ignored or crucially undervalued, in order to produce an authoritative edition which restores – for the first time since the original edition was published in 1896 - Dvorák’s final and definitive version of the solo cello part. This differs, in details, in almost every bar from the version found in all other modern editions, while hundreds of corrections have also been made to the orchestral parts.

• With Dvorák’s final and definitive version of the solo cello part
• With hundreds of corrections in the solo cello part as well as the orchestral parts
• With hitherto unknown details regarding the collaboration between Dvorák and Wihan
• With Dvorák’s original piano reduction
• With Feuermann's and Casals' alternatives to a passage in the first movement
Brand reference number:BA9045
Quick navigation
Home
Sheet music
Classical sheets
Ensemble and orchestra
Full score
Full score
Similar items
find below suggestions for equivalent products in the same price range.

-7%