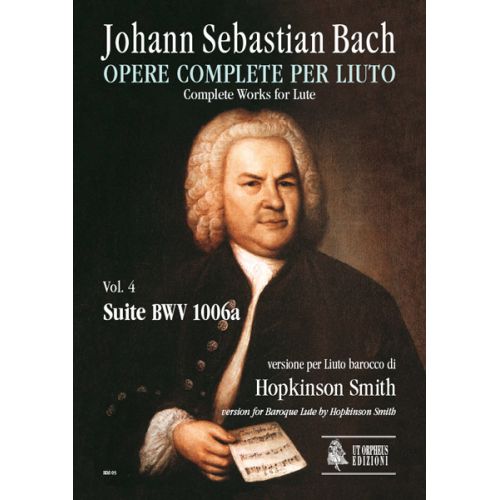 The product range of ut orpheus

The works of Johann Sebastian Bach which are generally considered to have been originally written for the lute (BWV 995-1000 and 1006a) are being published here in a series of practical editions. Unlike some other collections in Bach’s oeuvre, the lute works come from diverse sources and were never considered to be an organic unit during the composer’s lifetime. They were first grouped together at the end of the 19th century by the editors of the Bach Gesellschaft. The numbering of the Suites that is commonly used by guitarists today dates from the 1920’s.
Many questions remain regarding the playability of these works on the lute. The original keys are sometimes awkward, and there are problems of range and density of texture which can lead one to ask whether they were actually conceived for the lute at all. Interestingly enough, Bach’s solo Sonatas and Partitas for violin and his Suites for cello often lend themselves more organically to the lute.
As the problems relating to the so-called ‘official’ works became more clearly defined, a significant body of practical and musicological reflexions on these matters came to be published in different journals and editions. It is not my intention to go through this literature here, nor do I intend to discuss the varieties of sometimes very creative solutions that other lutenists may have utilized in approaching these pieces. My aim is, rather, to present playable versions in tablature for the standard 13-course lute of Bach’s time in the d minor tuning. I have steered clear of scordatura tunings and modifications to the instrument itself. In some cases, where the original key of a piece seemed unnecessarily cumbersome, I have changed it, taking it as a principle that there is nothing sacred in a tonality if it renders a piece, or parts thereof, unplayable. I feel that this approach starts with the music itself and seeks to bring it to life in a pragmatic spirit that is close to the 18th century.
Each edition in this series will have an introduction which discusses sources and specific points of interest or enigmas related to the individual piece. I feel that, ideally, every student of the lute should make his or her own versions of these pieces, and thus be directly confronted with problems related to them. Hopefully these editions will stimulate thought on these matters and also provide clear and practical solutions which can help one on his or her journey toward the incomparable expressiveness and depth of these works.