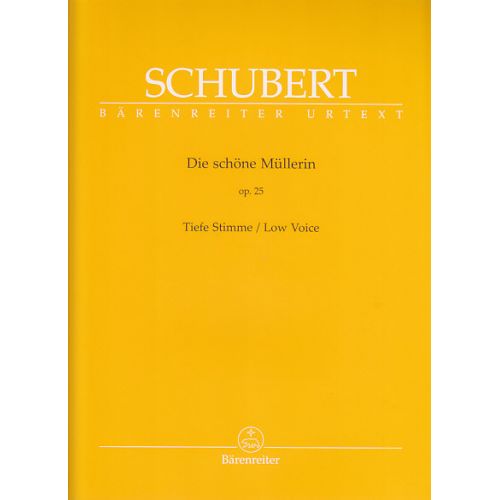 It was published in its final form in 1820 by Wilhelm Müller in the collection „Sieben und siebzig Gedichte aus den hinterlassenen Papieren eines reisenden Waldhornisten“.

At that time the cycle included 23 poems. Schubert omitted three poems as well as a prologue and epilogue in his setting, thereby overriding the irony and pessimistic ending intended by the poet.

Schubert’s composition was published in five books between February and August 1824.

The first lieder in the cycle are happy and composed with a forward momentum, characteristics which are also reflected in the virtuoso piano accompaniment. The second part of the song cycle turns into resignation, melancholy and impotent rage and is similar to Schubert’s “Winterreise” in its longing for death.


- Famous song cycle available for the first time in a separate edition.
- Based on the definitive “New Schubert Edition”
- Foreword by Walther Dürr discussing the history of the work’s composition and sources (Ger/Eng)
- With an English translation of the song texts by Richard Wigmore