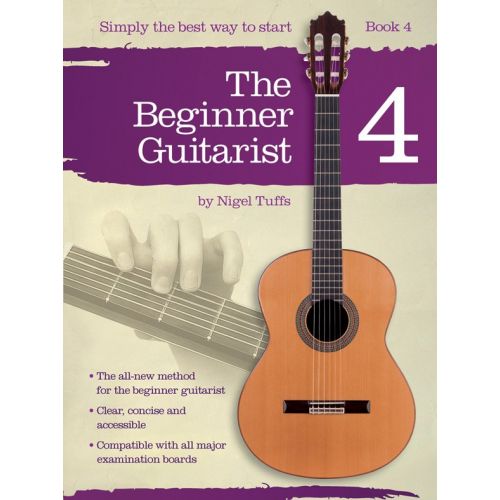 The Beginner Guitarist has been born out of 20 years of teaching experience. Although specifically designed as a teacher’s aid, it can also be used for independent study.

Book Four builds on the ideas and techniques explored in the first three books. It begins with an extensive look at the key of A major, initially in second position but moving through other positions and finishing with an exercise in thirds and a duet.

The remainder focuses on triplets and compound time, beginning with triplet exercises in 2/4 before moving on to 6/8. The book then features swing rhythms before finishing with a Habanera, Renaissance pieces and a modern piece in multiple time signatures.

About the author: Nigel Tuffs is an instrumental teacher with more than 20 years of experience in all areas of guitar teaching. Originally a member of several rock bands he completed an honours degree at the Colchester Institute, specialising in composition and performance, and has since worked extensively as a chamber musician, in guitar ensembles, as an accompanist and also as an educator.
Referencia marca:MUSCH79365
Navegación rápida
Home
Partituras
Métodos y pedagogía
Guitarra
Guitarra acústica
Productos similares
A continuación te mostramos productos que tienen características similares en el mismo rango de precios.
