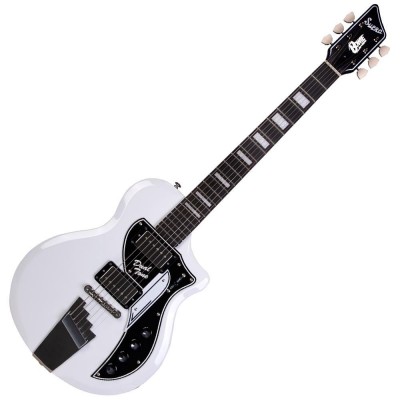 The Reality GuitarSupro is proud to introduce the David Bowie 1961 Dual Tone. One of two Supro Dual Tone guitars owned and loved by Bowie, this hard-tail version was the first Dual Tone that David acquired, just prior to recording the Reality album. This Supro Dual Tone became such an integral part of the sound and imagery of the Reality album that David purchased a second one for the ensuing Reality Tour.“When Reality got underway, Bowie had only recently invested in several Supro guitars, one of them a hard-to-find white model similar to that played by Link Wray on ‘Rumble’. He’d managed to pick this up on eBay (I kid you not) and had it revamped by Staten Island designer/ manufacturer/ restorer Flip Scipio. After Scipio went to work on it, Bowie ended up with a guitar that, according to Tony Visconti, “was never meant to sound so good”, and he played this a lot during the Reality sessions, along with a Supro 12-string that had also been overhauled by Flip Scipio, and some harsh-sounding Supro valve amps.” – Richard Buskin from “Recording Reality” – Sound on Sound Magazine, October 2003.David Bowie’s love of the Dual Tone was strong, as evidenced by the guitar’s frequent appearance in promotional photos from his post-9/11 era in New York City. Bowie’s Dual Tone guitar features prominently on the cover of the New Killer Star single, echoing the cover art for Link Wray’s iconic “Rumble!”. With Bowie’s face just out of view, the focus of the image becomes the guitar itself. This begs the question: why is Bowie’s face cropped out of the image? Why is the focus on the guitar? Maybe we aren’t supposed to know? Then we remember the album title: Reality.“I feel that reality has become an abstract for so many people over the last 20 years. Things that they regarded as truths seem to have just melted away, and it’s almost as if we’re thinking post-philosophically now. There’s nothing to rely on any more. No knowledge, only interpretation of those facts that we seem to be inundated with on a daily basis. Knowledge seems to have been left behind and there’s a sense that we are adrift at sea. There’s nothing more to hold onto, and of course political circumstances just push that boat further out.”  – David Bowie from “Recording Reality” – Sound on Sound Magazine, October 2003Features:• Mahogany Body, Maple Neck with Pau Ferro Fingerboard• Individually numbered• Mirror-finish Bowie headstock inlay • Supro Vistatone pickups• 24 ¾” scale length• 12” fretboard radius• Ergonomic set-neck design• Signed and numbered certificate of authenticity included• Includes Supro Premium Gig Bag