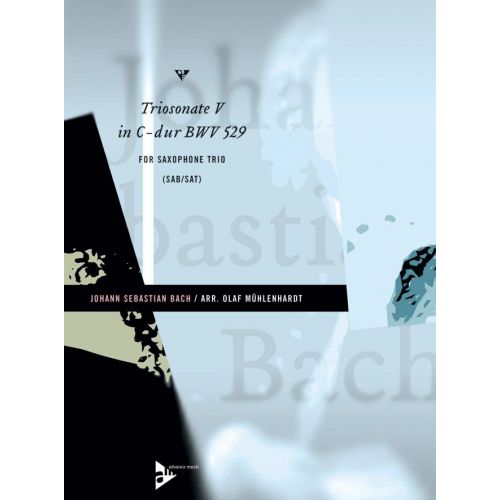 add remove
Triosonate V in C-Dur BWV 529
for Saxophone Trio
Bach composed the six Trio Sonatas for Organ BWV 525 - 530 probably between 1727 and 1730 when he was Cantor at the St. Thomas Church in Leipzig. The trio sonata as a baroque genre usually employs four players: two solo parts (violin, flute or oboe), a bass part (violoncello, violone or bassoon) and the continuo part (organ, harpsichord or lute). It is assumed that during his time in Kothen (1717 - 1723), Bach composed a few dozen trio sonatas for various instruments, of which very few have survived. In fact, the Triosonata for two Flutes and Continuo BWV 1039, along with the one from the Musical Offering (which was written much later), is the only one of which the authenticity can be regarded as certain. Bach arranged it for Viola da Gamba and harpsichord (BWV 1027). The upper solo part is played by the right hand of the harpsichordist while the Viola plays the second part an octave lower. Later, Bach arranged the last movement for organ (Trio in G). Here, the pedal plays a slightly simplified bass, and the left hand takes up the second part. Maybe some of the movements of the six Trio Sonatas for Organ go back to lost compositions Bach has arranged in a similar manner. There are earlier versions of many movements, and the original of at least one movement (BWV 528, I.) was written for more than one instrument: the Sinfonia of the second part of Cantata BWV 76 which is set for Oboe d'amore, Viola da Gamba and Basso Continuo. The linear, distinctly chamber music-like disposition of the Sonatas further supports this assumption, and a number of recent recordings of the Sonatas with two solo instruments and basso continuo convincingly justify the reconstruction of a hypothetical original. Sonata V is the only one that could be considered a three movement Concerto. The first movement Allegro with its chamber music vocabulary is an excellent example for speculations that the organ sonatas might have had instrumental predecessors. Its style could easily be associated with a sonata for two flutes or two violins and continuo. The formal layout is highly complex. The three-part architecture is strictly symmetrical and this principal not only applies to smaller formal units but also to the composition of thematic material. Despite the complexity, the movement never sounds rigid or dull, the instrumental dialogue freely unfolds and melodic development is always relaxed and playful. The Largo in a-minor has a three-part Da capo aria form with elements of a fugue. The lyrical, expressive melody is answered on the fifth by the second part, while the first continues with a chromatic counter-subject. The middle section opens and closes with two slightly more playful interludes (bars 13 + 33) with the main theme in their center, this time in the parallel of C-major, avoiding chromaticism. After the Da capo the movement closes with a phrygian half cadence (IV6 - V) and leads into the last movement. In comparison with the more ,modern' theme of the first movement, the fugue theme of the Allegro appears a bit conventional. But the motivic development and the organisation of the two-part form are not any less sophisticated. In bar 29 a new theme is introduced, that is combined with the first in the coda (bars 51 + 141). As in most of the final movements of the trio sonatas, the bass is actively involved in the development of the themes, especially in motivic sequences. Due to the range (theme of the first movement in the Alto part) the sonata was transposed a halfstep above the original key. This also allows playing the bass line with a baritone saxophone without low A. Olaf Muhlenhardt, December 2008
Nombre de pages :68
Referencia marca:ADV7706
Opiniones clientes
/5
on reviews
Quality
Quality / price
Use
See all reviews
VIDEOS




Productos similares
A continuación te mostramos productos que tienen características similares en el mismo rango de precios.

-44%