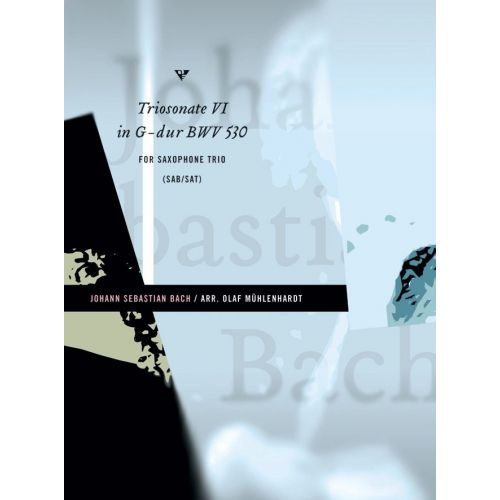 add remove
Triosonate VI in G-Dur BWV 530
Bach composed the six Trio Sonatas for Organ BWV 525 - 530 probably between 1727 and 1730 when he was Cantor at the St. Thomas Church in Leipzig. The trio sonata as a baroque genre usually employs four players: two solo parts (violin, flute or oboe), a bass part (violoncello, violone or bassoon) and the continuo part (organ, harpsichord or lute). It is assumed that during his time in Kothen (1717 - 1723), Bach composed a few dozen trio sonatas for various instruments, of which very few have survived. In fact, the Triosonata for two Flutes and Continuo BWV 1039, along with the one from the Musical Offering (which was written much later), is the only one of which the authenticity can be regarded as certain. Bach arranged it for Viola da Gamba and harpsichord (BWV 1027). The upper solo part is played by the right hand of the harpsichordist while the Viola plays the second part an octave lower. Later, Bach arranged the last movement for organ (Trio in G). Here, the pedal plays a slightly simplified bass, and the left hand takes up the second part. Maybe some of the movements of the six Trio Sonatas for Organ go back to lost compositions Bach has arranged in a similar manner. There are earlier versions of many movements, and the original of at least one movement (BWV 528, I.) was written for more than one instrument: the Sinfonia of the second part of Cantata BWV 76 which is set for Oboe d'amore, Viola da Gamba and Basso Continuo. The linear, distinctly chamber music-like disposition of the Sonatas further supports this assumption, and a number of recent recordings of the Sonatas with two solo instruments and basso continuo convincingly justify the reconstruction of a hypothetical original. The sixth Trio Sonata might be the only one that Bach explicitly composed for this collection. The particularly high number of changes in the manuscript might indicate that he was still working on it when he copied the Sonata into the collection. The first movement Vivace has a certain resemblance with the first movement of Bach's Italian Concerto for harpsichord. It is a concerto movement, but the solo and tutti passages are often ambiguous. The unison in the beginning is unparalelled in the Trio Sonatas and emphasizes the concerto character of this movement. The first theme returns in modified forms: syncopated (bar 53), in sequence (bar 73) and embellished in minor (101). Extended arpeggios in the interludes (T 37 - 52, 85 - 100 und 137 - 152) and a remarkably active bass (bar 101) effectively contrast the homophone main theme. The declamatory character and its rhythmically and melodically independent solo parts make the Lento sound more like an aria from Bach's cantatas with obligato (violin, flute or oboe) than a chamber sonata. There are elements of the Siciliano (esp. the dotted 6/8 rhythms) and the bass gets involved in the thematic development.
Like in Sonatas BWV 526, 528, und 529 the bass is also involved in the development of the fugue subject in the last movement Allegro. While the first theme only employs one and a half bars, the second theme in the parallel minor stretches over four bars and dominates the middle section with motivic sequences and frequent modulations. Due to the range (first theme soprano) the Sonata was transposed a halfstep above the original key. For the same reason, the upper parts were switched in bars 156 - 160. The alto part was transposed an octave down in bars 21 and 22 (with two eight notes pickup). The 8va in the third movement can be performed as written.
Vivace - Lente - Allegro
Nombre de pages :54
Referencia marca:ADV7707
Opiniones clientes
/5
on reviews
Quality
Quality / price
Use
See all reviews
VIDEOS




Productos similares
A continuación te mostramos productos que tienen características similares en el mismo rango de precios.

-6%