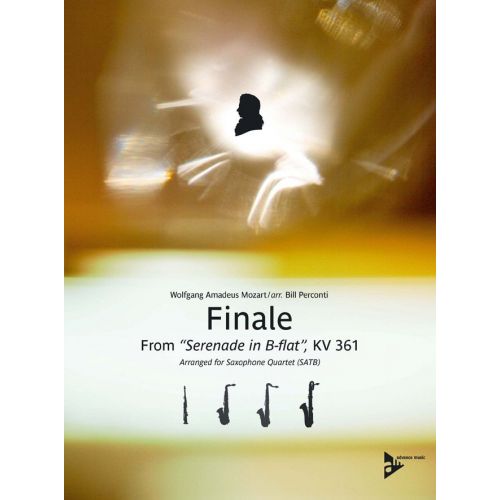 add remove
Finale KV 361
fom "Serenade in B-flat"
With the invention of the saxophone in the early 1840s, transcriptions are useful to present day saxophonists who wish to perform music of various styles and composers, and are thus an important part of the saxophone repertoire. One source of music to transcribe is the wind music of the Classical era. Mozart's Finale from Serenade in B-flat, KV 361 of the early 1780s was originally scored for paired oboes, clarinets, basset horns (now obsolete), and bassoons, plus four horns and double bass. The work was later performed for eight wind players. The Serenade has also been called "Gran Partita", implying music for the outdoors. Since one original intent for the saxophone was to replace less-voluminous woodwinds of French military/marching bands, it seems feasible that saxophones, while also handling well the virtuoso demands of the piece, are a good choice for this transcription. Two objectives were in mind while transcribing the Finale. One was to produce a relatively clean manuscript with a minimum of articulation and dynamic markings so as to allow interpretation by the performers. The articulation markings placed at the beginning of the work are provided only as suggestions. Secondly, the melodies were divided among all parts, rather than a solo featuring just the soprano saxophone. The Finale, a molto allegro in rondo form, should sparkle with cheerful charm and wit. Indoors or outdoors, saxophonists should strive for the lightness and grace so prevalent in much of Mozart' timeless music.
Nombre de pages :30
Referencia marca:ADV7697
Opiniones clientes
/5
on reviews
Quality
Quality / price
Use
See all reviews
VIDEOS




Productos similares
A continuación te mostramos productos que tienen características similares en el mismo rango de precios.

BON PLAN
-29%