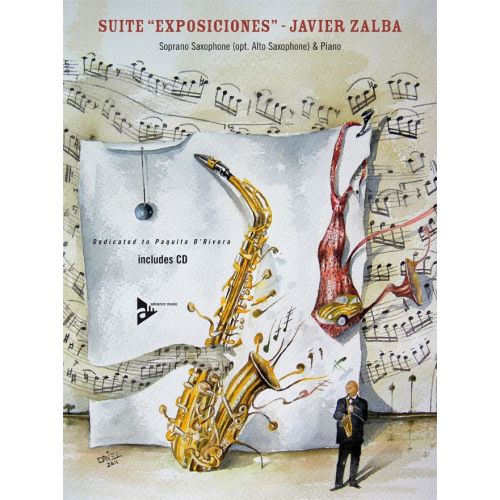 add remove
Suite 'Exposiciones'
This composition is in its own way meant to be a tribute dedicated to Paquito D'Rivera showing the author's appreciation for this musician as an exponent of Cuban music of the past and present century, who represents a stronghold and example for all musicians - in particular for saxophonists and clarinetists - not only in his capacity as a performer and composer but also as a cultivator of both sound worlds, the so-called classical music and its popular counterpart in its most ample interpretative spectrum. The piece consists of four movements: Allegro Moderato, Lento, Allegretto and Allegro con Fuoco. Its outstanding feature is the fusion of elements of jazz (such as the improvisation in the first and fourth movements, parts of which are accompanied by the piano with its interpretation being based on concepts characteristic of jazz or the "tumbaos" to be found in Cuban music) and classical music. The second movement starts off with a short recitativo, followed by a mixture of phrases borrowed from contemporary music, Afro-Cuban styles and jazz, whose distinctive rhythmic cells and articulations clearly define the character of the movement and finally culminate in tempo primo. The third movement shows a certain "casualness" and tranquility in its melody as well as in its accompaniment, including a cadenza the musician may execute at will; the movement then culminates either in an improvisation ad lib or in the mere execution of the melody as notated. The fourth movement is charged with spiritual energy. Saxophone and piano frequently trade phrases, and there is an abundance of improvised passages and jazz phrases. The movement finally ends in unison forte together with the piano.
Nombre de pages :56
Referencia marca:ADV7077
Opiniones clientes
/5
on reviews
Quality
Quality / price
Use
See all reviews
VIDEOS




Productos similares
A continuación te mostramos productos que tienen características similares en el mismo rango de precios.

BON PLAN