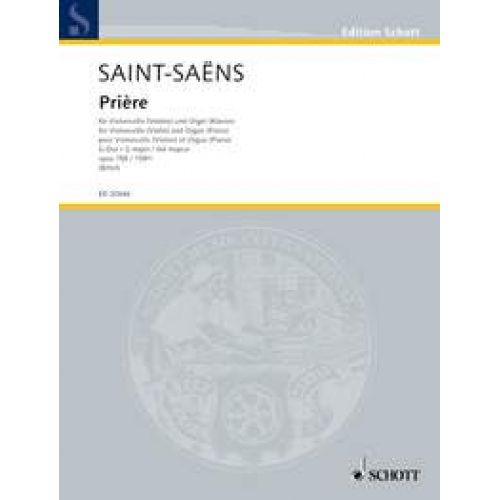 add remove
When writing his Concerto No. 1 in A minor, Op. 33, Camille Saint-Saëns wrote a "classic" of the violoncello literature. But the French musician even wrote other works for this in-strument: further solo works, a second concerto as well as two sonatas, a suite with piano accompaniment and the solo movement from his probably best-known work, The Carnival of Animals: the Swan. The French musician completed his extensive oeuvre with a series of chamber music pieces and smaller works, but also wrote compositions for the organ, for the instrument he had started his musical career with. After two fantasias for organ, Saint-Saëns eventually wrote his Prière, his Prayer, for violoncello and organ, Op. 158 in 1919. It is a simple and catchy tune: The cantabile beginning is followed by an expressive middle section which leads back to the quiet beginning. One year later, the original publisher also published an adaptation for violin, Op. 158bis which differs from the violoncello version in small corrections, an organ part adjusted to the register of the violin and a modified end-ing. Due to their meditative character, both versions are ideal for concert or liturgical per-formances. The organ part is meant for a double-manual instrument - the few pedal notes being marked "ad libitum" by the composer - so that Prière can also be performed on the piano.
Riferimento contrassegnatoSCHED20848
Comunicazioni
/5
on reviews
Quality
Quality / price
Use
See all reviews
VIDEOS




Prodotti simili
Vi proponiamo qui dei prodotti che hanno delle caratteristiche simili nella stessa gamma di prezzo.

-8%