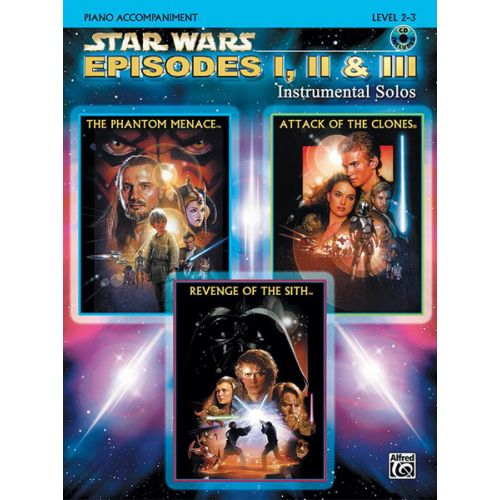 addremove
This piano accompaniment book is part of an instrumental series arranged for Flute, Clarinet, Alto Sax, Tenor Sax, Trumpet, Horn in F, and Trombone. It includes a specially designed accompaniment that can be easily played by a teacher or intermediate piano student. The instrumental solo part, in concert pitch, is added above the piano part so the accompanist or teacher can follow the soloist. A CD has also been included that features live demonstration performances of various instrument tracks throughout the series.
The instrumental arrangements in this series are completely compatible with each other and can be played together or as solos. Each book contains a carefully edited part that is appropriate for the Level 2-3 player, and a fully orchestrated accompaniment CD. Each song on the CD includes a DEMO track, which features a live instrumental performance, followed by the PLAY-ALONG track by itself. Titles are: from Episode I: Augie's Great Municipal Band * Duel of the Fates * Qui-Gon's Funeral * Star Wars (Main Title); from Episode II: Across the Stars * The Imperial March * May the Force Be with You * The Meadow Picnic; from Episode III: Battle of the Heroes * Princess Leia's Theme * The Throne Room.
Riferimento contrassegnatoALF00-IFM0528CD
Navigazione rapida
Home
Libreria musicale
Partiture varietà - pop - rock
Musiche da film - commedie music
Prodotti simili
Vi proponiamo qui dei prodotti che hanno delle caratteristiche simili nella stessa gamma di prezzo.

-18%