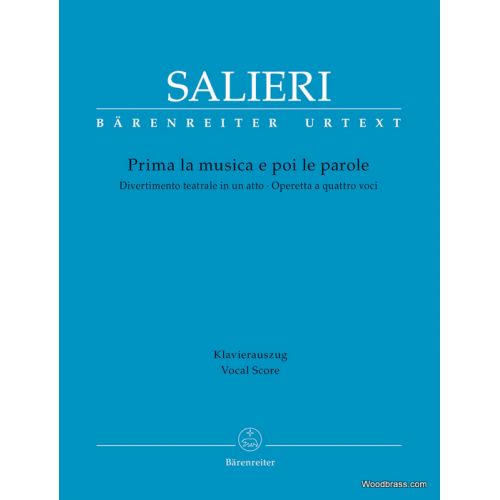 A memorable musical competition commissioned by the emperor Joseph II took place on 7 February 1786 as part of a festival in the orangery of the Schönbrunn palace. The Italian court singers and musicians performed Mozart’s Schauspieldirektor whilst Antonio Salieri’s Prima la musica e poi le parole was performed by a German Singspiel ensemble. This charming opera satire belongs to the genre of “metamelodrama” in which the opera itself becomes the subject of the action. The people who are part of an opera production, for example the writer, composer and prima donna, appear as characters on the stage and are presented in a humorous mirror image. In this ‘theatre about theatre’ Salieri parodies the music from Giuseppe Sarti’s Giulio Sabino in his insert arias, thus playing on the music which was totally familiar with the audience of that time. By reflecting on the musical-dramatic style of that time and discussing whether ‘the word’ or ‘the music’ should take priority, this masterpiece is considered to be a forerunner to Richard Strauss’s Capriccio.
This new edition of the score is published as part of OPERA – Spectrum of European Music Theatre in Separate Editions. There are several alterations regarding the libretto text, stage directions, articulation, ornamentation, etc. which have been incorporated into the newly engraved vocal score. Furthermore, all appendix numbers from the score which concern the quotations from Giuseppe Sarti’s Giulio Sabino have also been incorporated.
- Urtext edition based on the historical-critical hybrid edition OPERA-Spectrum of European Music Theatre in Separate Editions edited by Thomas Betzwieser (music edition) and Adrian La Salvia (text edition).- Original Italian libretto with singable German translation- Comprehensive bilingual foreword (Ger/Eng) on the genesis and reception of the work, on metamelodrama and intertextuality- Includes an extensive appendix to the quotations taken from Giuseppe Sarti’s Giulio Sabino- Idiomatic piano reduction
Riferimento contrassegnatoBA8811-90
Comunicazioni
/5
on reviews
Quality
Quality / price
Use
See all reviews
VIDEOS




Prodotti simili
Vi proponiamo qui dei prodotti che hanno delle caratteristiche simili nella stessa gamma di prezzo.

-7%