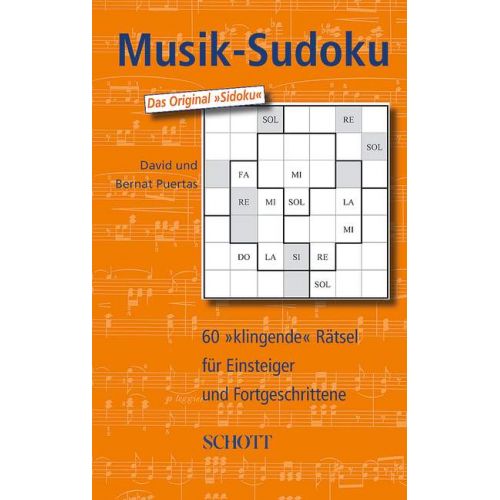 The Sudoku fever has finally reached the world of music. 'Musik-Sudoku' is the first musical variant of the popular number-placement puzzle. Instead of numbers, the seven solfège syllables Do Re Mi Fa Sol La Si have to be entered in a certain order. The really special thing about it is that the notes in the marked boxes match the beginning of a famous melody – from 'Let it be' by the Beatles to Mozart's 'Kleine Nachtmusik' –, thus providing a musical clue to the solution.

The puzzles of varying difficulty, from 'elementary' to 'virtuoso', can also be resolved by players without a special knowledge of music. What is most required is brains, power of deduction and a bit of patience. And for the experts among the puzzle freaks, there are also dodecaphonic sudokus and sudokus based on musical symbols.

Coming from a family of musicians, the brothers David and Bernat Puertas jointly invented the musical sudokus. The appropriate software was developed by Bernat, the computer scientist, who currently works in a games company. The idea for the musical solutions was conceived by his brother David, who is both a musician and an author of books on music by composers such as Mozart and Stravinsky.
Merkreferentie:SCHED20021
Klantenbeoordelingen
/5
on reviews
Quality
Quality / price
Use
See all reviews
Bijbehorende accessoires
ANDERE MUZIKANTEN HEBBEN OP HETZELFDE MOMENT DEZE ACCESSOIRES GEKOCHT!


Een vraag?
If you end the current chat session, you will lose the chat logs.
Are you sure you want to leave it?
Online Chat: niet beschikbaar
De adviseurs van Woodbrass zijn op dit moment niet beschikbaar.