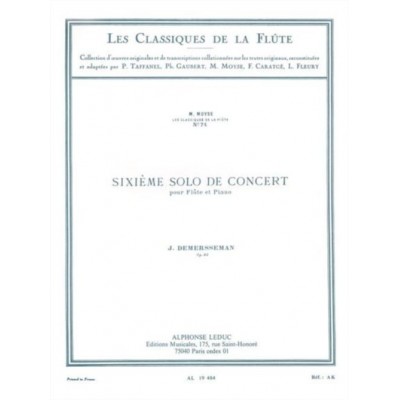 addremove
Composed by Jules Demersseman (1833-1866), Concert Solo n°6, Op. 74 has been reviewed by the French flautist Marcel Moyse. Written for Flute and Piano, it would fit players with advanced skills and abilities and a great endurance. It contains up to 5 flats and 4 sharps.

Part of the series 'Flute Classics', this piece number 76 is among those adapted by P. Taffanel, Ph. Gaubert, M. Moyse and others.

Very enjoyable, yet very difficult, this piece was written as a Concert Solo and could be easily be used in recitals or contests.