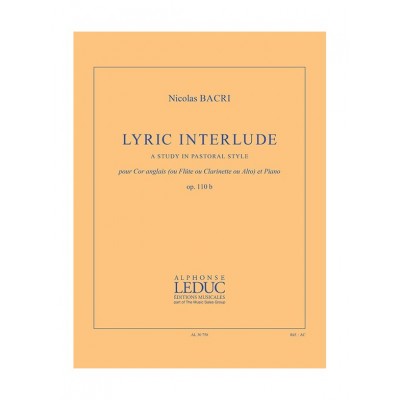 addremove
Rarely has a musical work been better characterized by its subtitle than Nicolas Bacri’s Lyric Interlude: ‘A Study in Pastoral Style’. When, in 2008, the composer received the commission for a piece with English Horn from Cecilia Benner, patron of the Chamber Music Society of Detroit, he immediately thought of the duo between this instrument and the Oboe that Berlioz, in the Symphonie fantastique, placed at the beginning of the ‘Scène aux champs’, making suddenly appear a nocturnal country landscape where two shepherds carry on a dialogue on their pipes. First performed in March 2009 in its original version for English Horn, Violin and Cello, the Lyric Interlude for English Horn and Piano (Op.110b) nonetheless proclaims another tradition: that of British pastoralism, illustrated by the music of Ralph Vaughan Williams (1872-1958), the 50th anniversary of his death having just been celebrated. This score pays him homage of rare sensitivity: set off by refined counterpoint, the undulating lament of the beginning, rhythmically supple, evokes the waving wheat, as does Vaughan Williams in the opening undulation of his Symphony No.3. The lyrical effusion, briefly interrupted by a scherzo in 6/8, again pours out, making the work evolve towards a slow, ecstatic atmosphere, close to the last of the English composer’s Three Preludes on Welsh Hymn Tunes. Far from bucolic, postcard clichés and servile imitation, this Lyric Interlude opens the doors to a realm where pure beauty reigns.