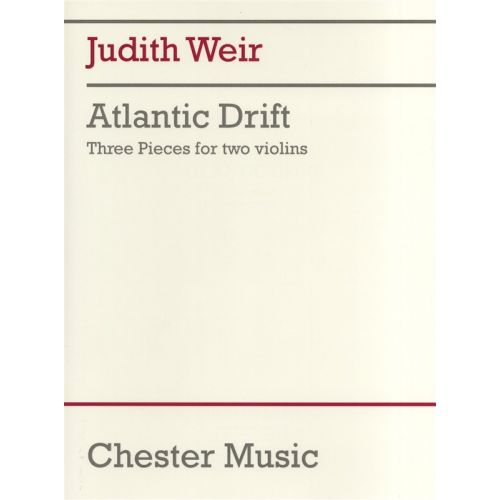 The music of these violin duos has been influenced by the centuries-long flow of traditional music from the British Isles to North America and back again. The compositions are dedicated to several people who are keeping that transatlantic musical flow in motion today.

Sleep Sound ida Mornin' is a very short duo for two violins based on a traditional tune which I first heard in the Orkney Islands, although played there on the banjo by a native of Kansas. My extended version, with a slow introduction, was first played in Boston on 29th January 1995 by Lesley Chen and Nathan Schmidt, members of the New England Conservatory's Preparatory Division, during their annual weekend festival of contemporary music. This very remarkable and encouraging event was devised and organised by Rodney Lister, to whom this piece is dedicated.

An earlier, even shorter version of Atlantic Drift, written for violin and piano, was first performed by Peter Sheppard Skaerved and Aaron Schorr at the Royal Academy of Music, London on 9th May 2006, in a concert to celebrate the 70th birthday of the American composer and transatlantic communicator, Elliott Schwartz. The melody is original, though clearly influenced by the music and perpetual tides of the Hebrides.

Rain and Mist are on the Mountain, I'd Better Buy Some Shoes

This four-movement duo for two violins is based on a fragment of a Gaelic folk song from Barra in the Western Isles of Scotland. The title suggests that although the Gaels of yesteryear were rich in poetic expression and the beauties of nature, they were otherwise not very affluent. Rain and Mist was first performed at the Wigmore Hall, London on 6th February 2005, by Corina Belcea and Laura Samuel.

Atlantic Drift
Rain And Mist Are On The Mountains, I'd Better Buy Some Shoes
Sleep Sound Ida Mornin'