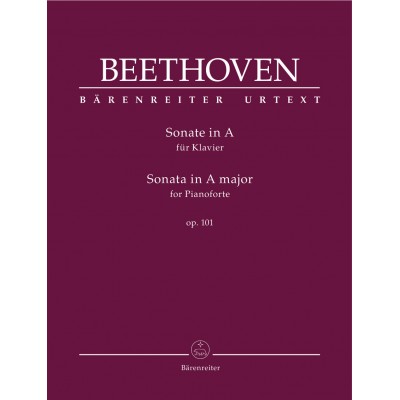 Bärenreiter continues its Urtext edition of the complete Beethoven piano sonatas with three major works at once.

They begin with the frequently played op. 2 Sonatas (nos. 1-3) (BA 10859) which stem from his early yet mature oeuvre when he was developing an independent style from the legacy of Mozart and Haydn.

They then proceed to the lyrical D major Sonata op. 28 from his middle period (nicknamed “Pastorale” by the publisher of the original edition) (BA 11814) and finally to the Sonata op. 101, Beethoven’s first sonata specifically intended for the “hammerklavier” and the one that introduced his esoteric late style to the piano sonatas (BA 11811).

The acclaimed Beethoven specialist Jonathan Del Mar has consulted every known source for these critical Urtext performing editions. In addition he has analysed various copies of the prints published during Beethoven’s lifetime. The results of his accurate research are presented in a meticulously edited musical text at the cutting edge of scholarship, together with a detailed Critical Commentary.

All three volumes stand out in terms of their elegant and well-presented layout. Special emphasis has been placed on optimum page-turns and on the consideration of the flow of the music. The highly informative Introductions on the genesis and significance of the works are supplemented by valuable notes on historical performance practice.