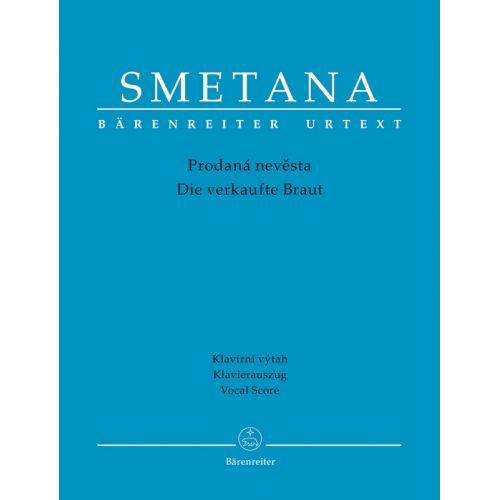 Bedrich Smetana (1824–1884) only began to devote himself intensively to the project of an original opera in Czech at the age of 38. The libretto of “The Bartered Bride”, the second of Smetana’s nine operas, was written for Smetana by the poet and journalist Karel Sabina. The subject chosen for the comic opera was the story of a pair of lovers in the countryside whose relationship is disapproved of by their parents. It is set during the festival at a village church anniversary.

The final form of the work, which soon came to be regarded as a national opera, was preceded by a relatively difficult genesis.

The opera was written between 1863 and 1865 and was premiered on 30 May 1866 at the Provisional Theatre in Prague, where the composer’s last version of the work was also performed in 1870.

This vocal score contains the musical text of the critical edition of Smetana’s own vocal score.

The newly-set edition contains both Czech and German vocal texts; the German singing translation is by Kurt Honolka.

The newly-set and revised performance material for the entire opera, based on the critical edition by Frantisek Bartos, is available on hire.