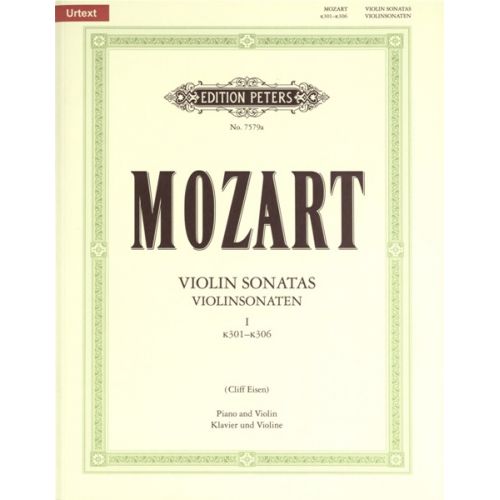 Details: This complete edition of the Mozart Sonatas for Keyboard and Violin has been researched and prepared by Cliff Eisen, one of the most distinguished Mozart scholars of our time. Professor Eisen recognises that many of the apparent inconsistencies and idiosyncrasies of Mozart's notation are perfectly deliberate, and that the attempts in many other editions to impose uniformity upon similar phrases or musical paragraphs can be misguided. As he writes in the preface: '…the notion that the classical style represents a model of symmetry, balance, and clarity is for the most part a 19th-century fiction … it has little to do with Mozart's actual practice, which is based primarily on variety of both content and articulation. So in this new edition, alternative readings found in parallel passages are preserved, rather than being sterilised by a spurious quest for conformity. Naturally all such instances are noted within the Critical Commentary. The highly individual beaming within Mozart's autographs is also respected in the new edition, as this often contributes to our aural perceptions of phrase structure and accent. Professor Eisen is conscious that there is no single 'Urtext' for this music. On the contrary he believes that 'there is compelling evidence that Mozart's later performances of his works were characterised by changes – sometimes substantial changes – in the musical text'. It is the achievement of this edition to indicate how far this freedom of musical expression can extend, and as such it is likely to take pride of place in the collections of all those involved in the study and performance of these masterpieces.
Referência marca:EP7579a
Navegação rápida
Home
Livraria musical
Partituras de música clássica
Cordas
Violino
Produtos semelhantes
Propomos-lhe produtos com características praticamente idênticas e na mesma gama de preços.
