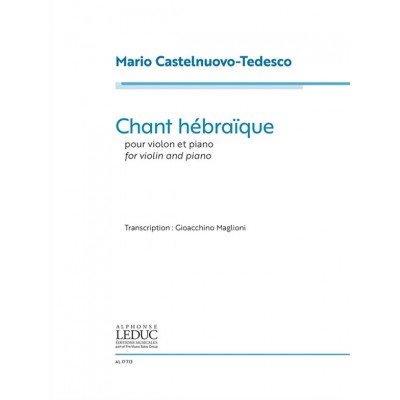 addremove
Born into a family that had lived in Florence since the expulsion of the Jews from Spain in 1492, Mario Castelnuovo-Tedesco (1895-1968) entertained only a distant relationship with the music he heard at synagogue: a Renaissance church held more appeal for the Florentine artist than the Oriental décor of his forefathers’ place of worship. It was only when he discovered Schelemo, a rhapsody for cello and orchestra written in 1916 by Ernest Bloch, that he began to understand what “Jewish music” could be. It would take until the death of his maternal grandfather, and the discovery of a collection of prayers set to music among his papers, for the young Castelnuovo-Tedesco to begin to explore Jewish music.

In 1928, two years after publishing the Dances of King David, he wrote this Vocalise-Étude for medium voice and piano at the request of vocal teacher Amédée-Landély Hettich, who wanted to include it in the Répertoire moderne de Vocalises-Études published by Leduc. The piece became so popular that it led to several adaptations, and the composer asked his close friend Gioacchino Maglioni (1891-1966) to transcribe it for violin and piano.

Divided into three sections, the work opens with a poignant lamento that grieves the tragic fate of the Jewish people. Countering what he felt to be a tendency of Jewish music to transform into a “Wailing Wall”, Castelnuovo-Tedesco follows the lamento with a folk dance whose brisk, “lively and stubborn” movement has great panache. The third section returns to the initial poignant theme before briefly reiterating the dance motif, allowing the piece to conclude on a hopeful note.