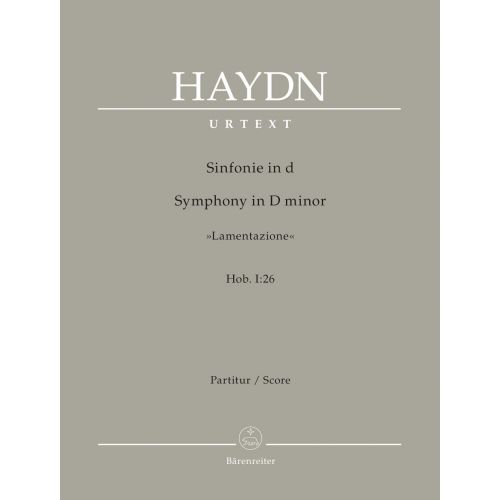 Haydn’s Symphony No. 26 received its nickname “Lamentazione” during his lifetime, though it is unclear whether this stems directly from the composer.
This work probably originated no later than 1770. Its first and second movements quote excerpts from Gregorian chants used in Holy Week. In Haydn’s day it was customary to play individual movements in church services, and it may be assumed that these two movements were performed, and possibly composed, independently from each other.

Continuing the collaboration between Bärenreiter and the Henle publishing company in the areas of large-scale choral works, operas and symphonies, Haydn’s Symphony No. 26 is appearing, based on the Henle Complete Edition of the “Works of Joseph Haydn”. The complete performance material for several of Haydn’s “Sturm und Drang” symphonies and all of the London and Paris symphonies has already been published.

• Based on the Henle Complete Edition of the “Works of Joseph Haydn”
• Orchestral parts available in a large format (25.5 x 32.5 cm)