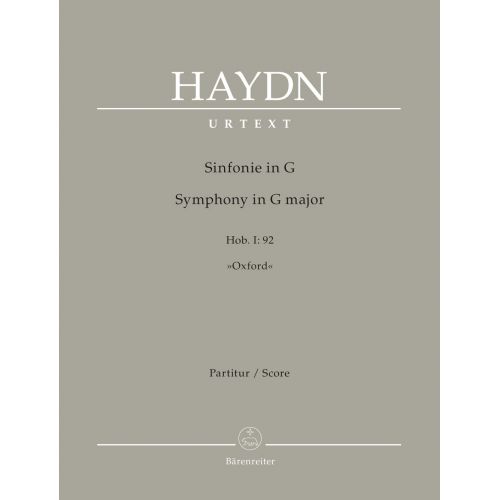 Like its companions Nos. 90 and 91, Haydn’s Symphony No. 92 in G major was written in 1789. All three symphonies were commissioned in 1788 by Prince Kraft Ernst von Oettingen-Wallerstein, who was to be granted exclusive ownership. However, Haydn first sold the works to the Parisian Masonic lodge Société Olympique and was thus unable to fulfil his obligation to send the autograph scores to the prince.

The symphony received its nickname “Oxford” in the 19th century, probably in connection with a performance that took place when Haydn received an honorary doctorate from Oxford University in 1791.

This edition continues the collaboration between Bärenreiter and the Henle publishing company regarding Haydn’s large-scale choral works, operas and symphonies. It is based on the Henle Complete Edition of the “Works of Joseph Haydn”. Bärenreiter has published the complete performance material for several “Sturm und Drang” symphonies and all of the London and Paris symphonies.