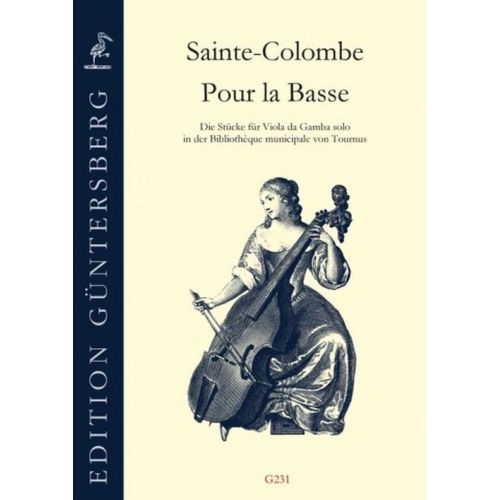 add remove
Sainte-Colombe (2nd half of 17th century)
Pour la Basse
The pieces for Viola da Gamba solo from the manuscript M.3 of the Bibliothèque municipale of Tournus

In 1992, in the French town of Tournus, an extensive anonymous music manuscript was discovered, which for insiders was nothing less than a sensation. For it turned out that 143 of the pieces in this collection of music for viola da gamba solo were by Sainte-Colombe, the most important viol player and composer in France before Marin Marais. Since, for various reasons, the manuscript is not easy to read for today’s players, we present here for the first time a practical edition that contains all of Sainte-Colombe’s pieces from the Tournus manuscript. The transcription into modern notation has been done with great care, and the original notation retained wherever possible.

Sainte-Colombe’s music is so interesting for the performer because it violates many compositional and musical rules, and as a result often seems improvised. Its soothing and frequently melancholy character is unique. It represents a challenge that every viola da gambist should take upon him/herself.
Referência marca:WALLG231
Opiniões
/5
on reviews
Quality
Quality / price
Use
See all reviews
VIDEOS




Produtos semelhantes
Propomos-lhe produtos com características praticamente idênticas e na mesma gama de preços.

-4%