The history of washburn

Some historys are worth to be told. Others looked despairingly for a content to receive a character. Historys are many times told by music as well, by the texts; it's a cultural and musical revolution! So the history of the Washburn guitars as well.

Deeply rooted in the tradition of excellent instrument marking, the Washburn guitars are proud to look back on an history of 120 years of instrument making which began 1883 in Chicago. The initial factory were only some blocks from the new, not far away from the Maxwell Street.

At the beginning of the 20s, the Maxwell Street became midpoint of a musical mouvement. Often the first refuge for thousands of afro-americans who came from the Mississippi Delta, the Maxwell Street became centre of the Blues from the Delta in his most brutal and most dramatic form. The newcomer and also the established musicians began to incorporate this place and soon they organized "Jams" in an quiet atmosphere far away from all commercial influences. One time anchored so strong in this place, their style of music did not only influenced the dominant form of the blues but also the form of the rock'n'roll.

Here on the Maxwell Street and in all smaller alleys around, on the sidewalks of the city, in the bars and in the "honky tonks", the Washburn guitars became the incarnation and event the philosophy of the musicians who "work hard" and play on this instuments after work. They became also the incarnation of the employees who developped and produced these instruments. That's the spirit which accompanied Washburn since these days.

The history of the Washburn guitars is the history of a multitude of musicians: from blues players who decided to play rock'n'roll via artists who are rewarted with platinum discs to modern guitar virtuosos. It's an history which can be heard and lived every time when you switch on the radio or follow a concert. It's also an history told by qualified artists and musicians who share a common love, a common passion for guitars.

Washburn is still today one of the leaders and follows the principle to unite design, innovation and technology in the aim to supply a big music scene with a rich sound. 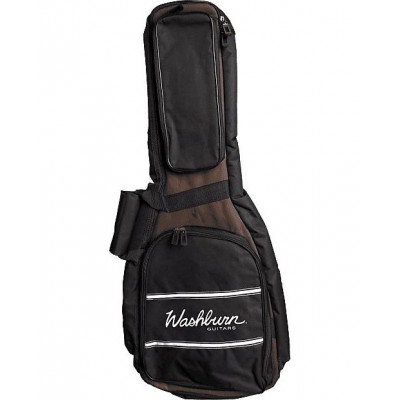 washburn
GIGBAG 3/4 ACOUSTIC GUITAR
bags and cases for classical guitars
£61.75
instead of £68.64
Online
Ref.: 304838


Woodbrass uses cookies to ensure that we give you the most appropriate services and offers according to your personal interests. If you choose to continue using this website, you agree to our use of cookies.

I agree
