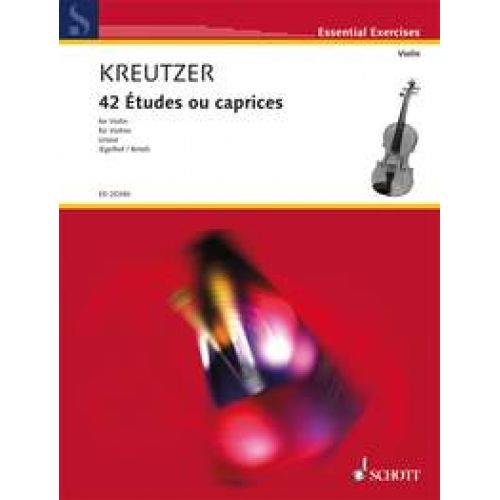 The product range of schott

addremove
There is hardly a violinist who has not dealt with some or even all 42 'Kreutzer etudes' sometime or other: Études ou caprices form part of the standard repertoire. Rodolphe Kreutzer (1766-1831) has not least remained unforgotten because of Beethoven's violin sonata of the same name - a work which had never been played by the violin virtuoso himself and not even been appreciated by him. His lightning career as a violinist led him into Napoleon's private orchestra and as a virtuoso across Europe before an accident put an end to his solo career. As a violin teacher, he taught in private aristocratic circles, then at the later Conservatoire and laid the foundations for a comprehensive methodology and didactics. For his teaching activities, Kreutzer wrote his 40 Études ou caprices (two were later added by another) in 1796. The present urtext edition is based on the first edition and contains the original, occasionally surprisingly different musical text with the original fingering, with a 'modern' setting being added. Even if Henryk Wieniawski once admitted: 'They are much more difficult than most violinists think', these studies form an indispensable part of all violin studies.
Brand reference number:SCHED20340
Quick navigation
Home
Sheet music
Classical sheets
Strings
Violin
Similar items
find below suggestions for equivalent products in the same price range.

-5%