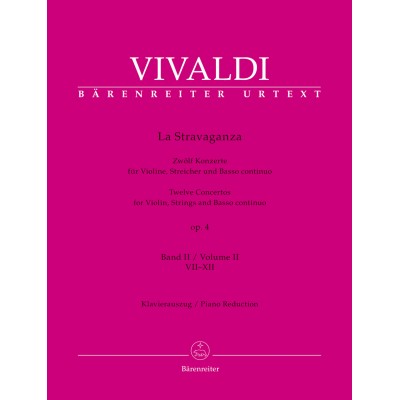 Antonio Vivaldi’s twelve concertos op. 4 known by the name of “La Stravaganza” were first mentioned as a collection of “Concerti a 4” in the 1711 Foreword of “L’Estro Armonico” op. 3. Their publication had to wait until 1716, when Estienne Roger issued them in two volumes of six concertos each. However, unlike the original announcement, “La Stravaganza” is more than a collection of concertos for solo violin with string accompaniment: in five of the concertos the soloist is joined by a second solo violin or even by a solo violoncello (Concerto No. 7).

The many reprints of “La Stravaganza” bear witness to its popularity and widespread dissemination well into the 1730s. Besides the surviving prints, there is a significant body of handwritten sources containing alternative versions for seven of the concertos. Some of these manuscripts stem from the music library of Johann Georg Pisendel.

This edition of “La Stravaganza” is not only the first scholarly-critical edition, it is also the only complete edition available. In addition to the twelve concertos handed down in the Roger edition, Bärenreiter offers an additional concerto in full score, piano reduction and parts contained in the 1728 print issued by the English publishers Walsh & Hare, as well as alternative versions (without viola) found in handwritten sources for Concertos No. 6 (Volume 1) and No. 11 (Volume 2).
Referência marca:BA756790
Navegação rápida
Home
Livraria musical
Partituras de música clássica
Cordas
Violino
Produtos semelhantes
Propomos-lhe produtos com características praticamente idênticas e na mesma gama de preços.

-5%